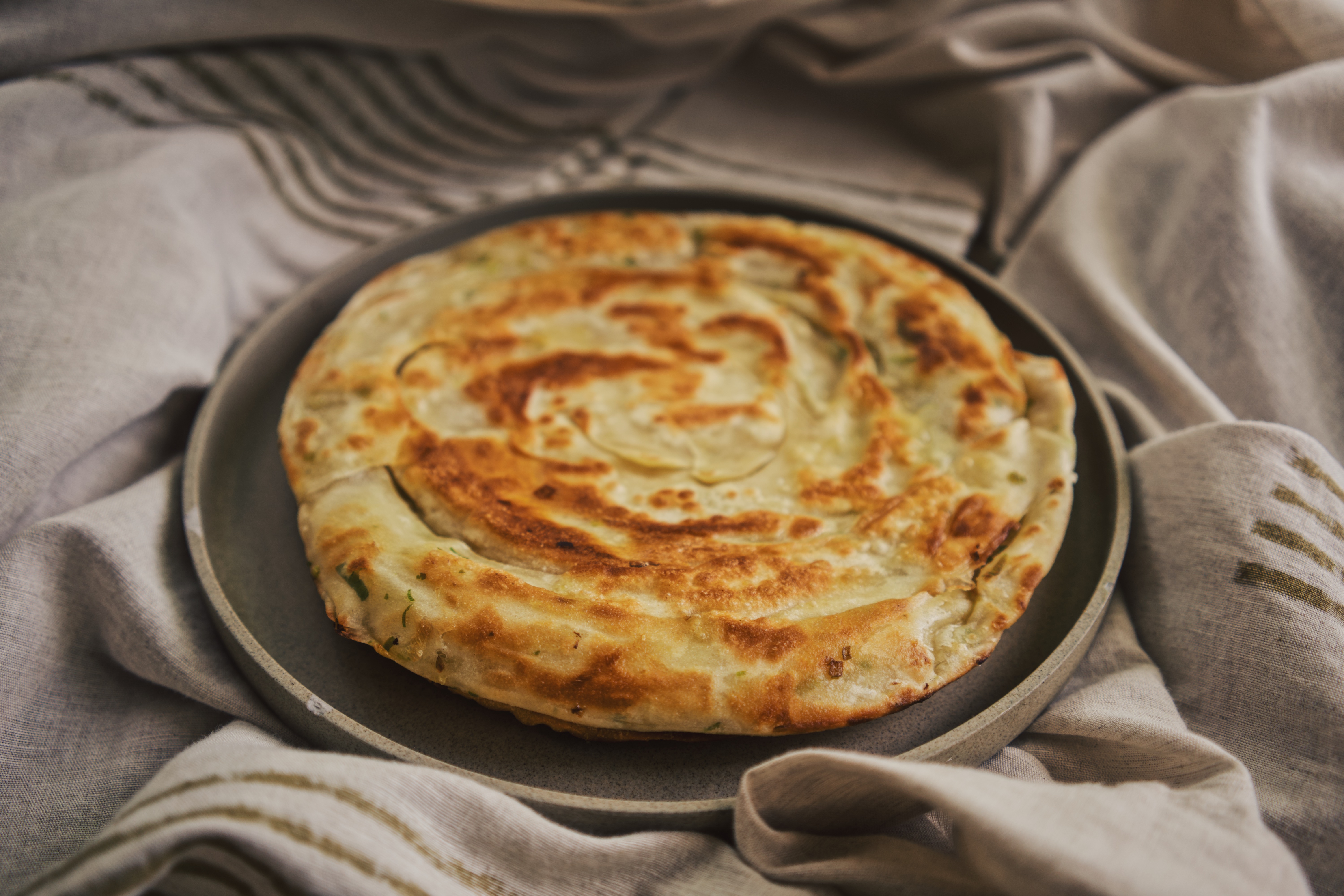 V1.0 — This is an open source recipe, a not quite finished recipe that's iterated on by readers and cooks like yourself! I'll test any recommendations and update the recipe as the community improves it, crediting everyone who contributes.

This recipe is the flavor combination no one asked for but selfishly I just had to bring into the world. My nostalgia may give my taste buds beer goggles, but I'd like to declare that Pringles Sour Cream and Onion chips are truly Michelin star level delicious. Its seasoning, familiar yet mysterious, overwhelms the prefrontal cortex of my brain where rational reasoning goes out the door as I devour an entire can of family-sized Pringles (you know the extra large ones made for entire families) before dinner. Scallion pancakes have always felt like the perfect vehicle for this seasoning. It's already packed with green onion while its crisp outer layers have familiar chip-like qualities. There must be something there right?

Overall version 1.0 tastes good!! Does it taste like sour cream and onion flavored chips?? Kind of. It has that same lick your fingers and keep eating quality when cooked into the scallion pancake, but it still tastes a bit too "milky" for me (potentially a result of the dough having buttermilk instead of water). But to try 1.0, mix together the seasoning ingredients to give it try. Feel free to iterate and let me know how you've improved upon it!

Mix and knead the dough v1.0

In a large mixing bowl, mix together the flour, buttermilk, and salt. I found that with version 1.0 dough paired with milk powder made it taste almost cheesier in flavor. I do think there's a version where it's the typical flour/water dough paired with the v1.0 seasoning that's worth trying. Anyway, with a silicone spatula, mix until it forms small chunks of dough, then knead with your hands until it forms a rough ball. Transfer the dough to a clean work surface and knead for around 8-10 minute until your dough is one smooth ball with the bounciness of a butt. Cover the dough in plastic wrap and rest for 20 minutes at room temperature.add the room-temperature water and mix until incorporated.

Divide and do a second rest

Uncover the dough and place on a lightly floured working surface. Roll the dough into a log, and then cut it crosswise into three pieces. Use your palm to flatten each piece of dough into a rough circles. Lightly coat each dough circle with oil, then cover the dough with plastic wrap and let it rest for 1 hour at room temperature.

When the dough has finished resting, uncover one of the dough pieces and place onto a lightly floured working surface. Roll the circle into a flat, thin oval. Spoon an even coating of oil onto each dough oval, then lightly sprinkle the surface with extra kosher salt and a third of the scallions. Finally, sprinkle the dough with a generous dusting of sour cream and onion seasoning.

With your palm, press down firmly onto your coiled dough to flatten (or use a rolling pin). Flatten with a rolling pin until the dough has reached your desired size (6 to 8 inches in diameter for a thinner pancake, 4 to 5 inches for a thicker one). Repeat with the remaining pieces of dough (tip: stack the pancakes with layers of parchment paper in between so they don’t stick together).

In a medium nonstick pan, warm a glug of oil over medium heat. Place 1 pancake into the pan and cook until lightly browned on each side, about 6 to 8 minutes total. Repeat for the remaining pancakes. Cut into slices and serve . If you don’t want to cook all the scallion pancakes, layer parchment paper between each raw, rolled out scallion pancake, Place scallion pancakes into a plastic freezer bag and freeze flat, then store for up to 2 months. To cook, just pan-fry directly from frozen in an oiled pan until browned.