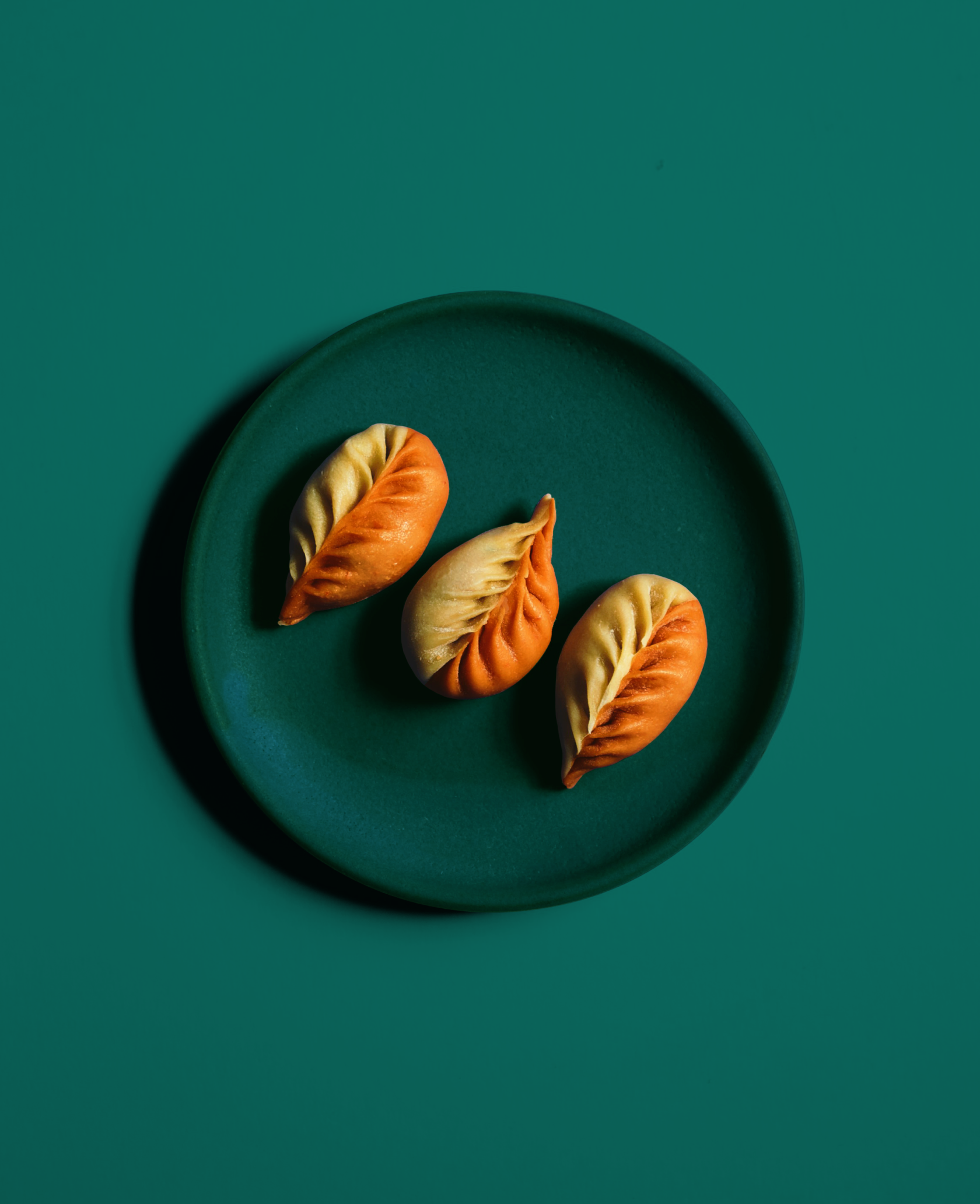 Hope everyone is staying safe and taking care of themselves in this crazy time. I wanted to make a bright dumpling in the test kitchen to offset all this Covid craziness and came up with these braided red pepper dumps that have red pepper paste in both the filling and the dough. Hope it gives you a little joy in this uncertain time!

Prep your bell peppers by chopping in half and separating flesh from inner core, discard white parts and stem. Roughly chop the bell peppers and place into a pot with olive oil on medium heat. Cook until soft, about 10-15 minutes, stirring every so often and making sure not to burn.

When bell peppers are soft, move to a blender and blend until smooth. Return the mixture to pot on low-medium heat. Stir mixture often as it starts to thicken. You'll know it's done when it has become a dark red, thick paste. Set aside when done until ready to use.

Pour flour from each color into two separate mixing bowls. Boil water, then pour 3/4 cup of water into each bowl. For the dough that will become orange, add two tbsp red bell pepper paste and an additional two tbsp of flour into one of the bowls.* Mix each color separately using a silicone spatula until each colored dough becomes a thick and chunky paste. With one color, use hands to incorporate the rest of the flour and begin the kneading the dough on a work surface (it'll be messy to begin with) until it becomes becomes smooth and the surface is uniform, around 10 minutes. When you press into the dough and it bounces back a little, you know it's done. Repeat the same process with the second color. When ready, wrap both dough babies in separate plastic wraps and let them proof for about 1 hour.

*This offsets the additional liquid the red pepper paste brings into the dough.

Place cabbage into a large mixing bowl, throw in 1/2 teaspoon of salt and mix with fingers, incorporating salt throughout. Let cabbage sweat out water for about 15 minutes. Meanwhile place remaining filling ingredients in a mixing bowl.

After the cabbage has sweated out all its water, place onto a thin dish towel or a few layers of thick paper towels and wrap around the cabbage to enclose. Using your hands and brute strength, squeeze out as much excess water from the cabbage as you can through the towel. Transfer cabbage to the rest of the filling mixture and use fingers to mix all that juicy meat mixture goodness together. Use a circular motion with your fingers until the filling looks homogenous and sticky, about 3 minutes.

Lightly dust a work surface with flour. When your dough is ready, take out each from the plastic wrap and cut in half. Use your fingers and create a rough rectangle with your two orange and two white halves into the size of a 3x5 index card (it doesn't have to be exact) and put dough through your pasta machine at the lowest setting. Take your flattened rectangles and fold each into thirds, use your fingers again to create same rough 3x5 rectangle shape once again (the grandmas say this step improves the texture/elasticity of the dough so I happily oblige). Put your dough rectangles through the pasta machine at its lowest setting.

Generously dust your dumpling wrappers with flour on both sides of your dough. Take a 3.5 inch round cookie cutter and firmly press and twist on your sheet of dough to cut out individual wrappers.

For a braid fold with two colors, take one orange dumpling wrapper and one white dumpling wrapper and use a bench or knife to cut in half. Reattach one orange and one white half by overlapping the edges in the center and pressing down to attach. Sometimes a tiny bit of water in the center edge helps attach the two halves together. (If doing solid color you can skip this step).

To fill, place a small golf ball sized amount of pork filling into the wrapper (it's okay if it seems like a lot). Create a taco shape with the wrapper and push one of the ends a 1/2 inch into the meat to make a “w”. Squeeze the two folds together and push into the meat again. This time, take the right half of the “w” and pinch, push into the filling, then take the left half of the “w” and pinch, squeeze into the filling again. Repeat this process (the excess meat will squeeze itself out) until you've enclosed the meat. Pinch the tail end of the braid and shape the dumpling to resemble a tear drop.

If Steam-Frying — Add generous dab of vegetable oil and place dumplings bottoms down and fry on medium heat for 1-2 minutes. Add 1/2 cup to 1 cup of water (it should hit about 1/3 of the dumpling) and place a lid on top (add water quickly to avoid too much splattering) and steam for 6-7 minutes on medium high heat. If water evaporates before 6 minutes, add a little bit more. Once the water has evaporated at the 6-7 minute mark, use a thin metal spatula to take dumplings out of the plan, then serve.
If Boiling — Place dumplings in a pot of boiling water. Let sit for a couple minutes until the water is boiling again. Pour a 1/2 cup of cold water into the pot to settle the boiling water back down (this will allow the filling to cook without having the wrappers break apart) Wait again until the water is boiling and dumpling start to float. Your dumplings should be ready to eat on the second boil (check one to make sure filling is cooked). If not just add another 1/2 cup of water and repeat process until dumplings are floating and water is boiling. Fetch those little guys out with a strainer to serve.