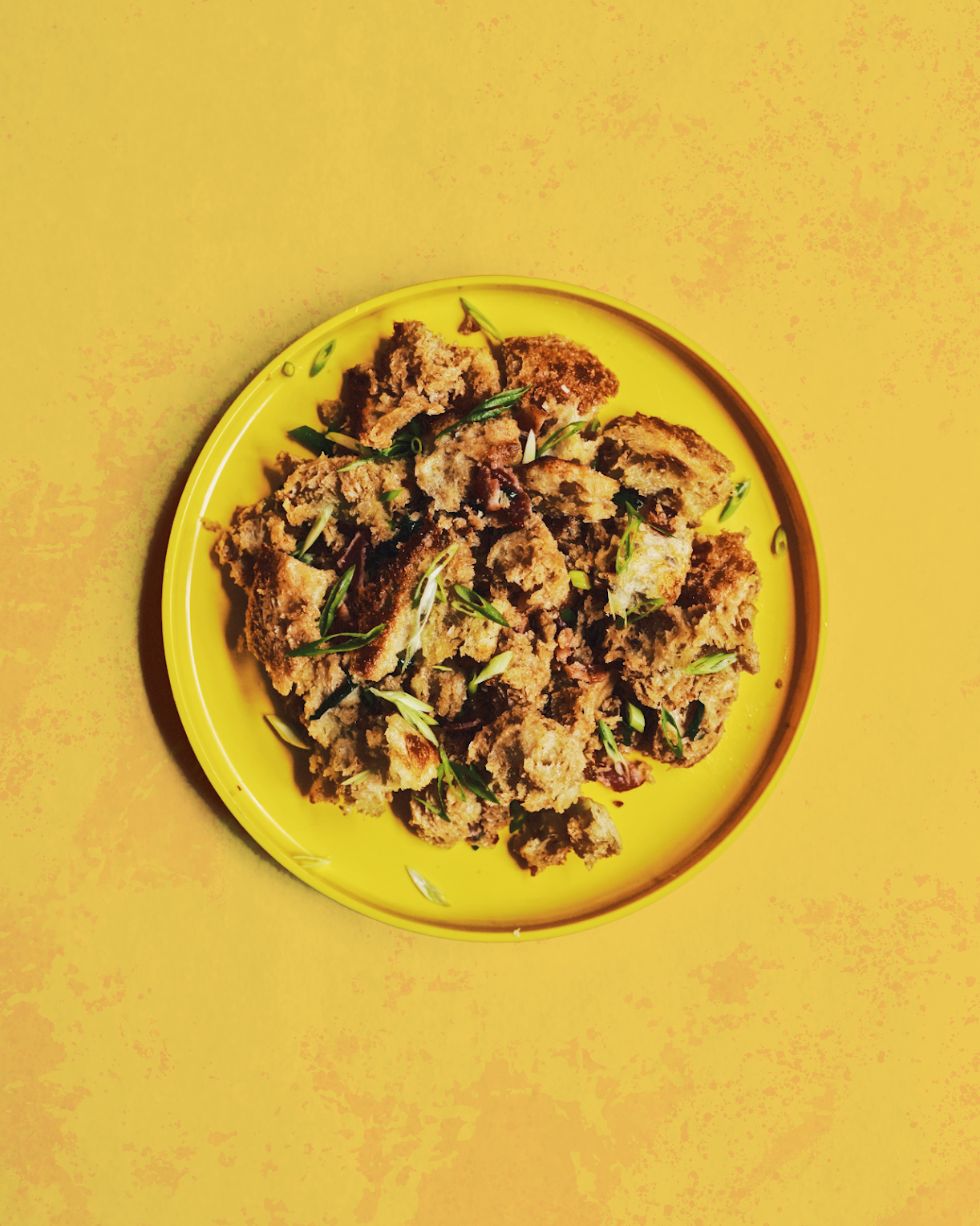 This stuffing is inspired by my love for Zuni Cafe's bread salad in San Francisco, a carb induced haze of crunch, chew, fattiness, and acidity. So yes, this is technically a bread salad but feel free to stuff it in your turkey's to make it a true stuffing. Fresh bread is hand torn and drizzled with homemade scallion oil. It's then crisped in a broiler to create crunchy, scallion-y edges while maintaining its soft chew. It's then doused with a scallion oil and black vinegar soy dressing, and mixed with bacon and fresh scallions. A perfect crunchy, acidic bite full of umami with hints of American and Taiwanese nostalgia.

6 bunches of scallions, plus extra for garnish

Cut scallions into quarters, then put into a strong blender or food processor along with grapeseed oil. Blend until completely smooth. In a large skillet or pot on medium heat, pour in the blended scallion oil. Cook on medium-high heat for 3-5 minutes until simmering and fragrant. The scallion solids should begin to separate and float to the top. Remove from heat and carefully strain hot scallion oil through a fine metal sieve into a heatproof container. You should end up with a vibrant green, transparent oil that’s quite fragrant.

Cut the crust off the bread and discard crust.* Tear bread into rough 3 inch pieces and toss with a drizzle of scallion oil to coat. Preheat a broiler on high, then place torn bread on a baking sheet and crisp the tops for about 1-2 minutes until the edges begin to turn golden brown. Remove from heat and give it a little toss. Place the sheetpan back under the broiler and again let the edges crisp for another 1-2 minutes until lightly golden. Remove from heat and set bread aside into a large mixing bowl.

*You can use the discarded crust for croutons!

On medium to medium-high heat, lay bacon strips on a saucepan and cook until lightly crisp and cooked through about 3 minutes each side. Set cooked bacon on a plate lined with paper towels, then dice into small pieces. Set aside until assembly.

In a separate mixing bowl, pour in 1/2 cup of freshly made scallion oil alongside the remaining dressing ingredients. Mix thoroughly until combined.

Evenly pour the dressing as you toss the bread to evenly coat. Add in cut bacon and some extra diced scallions and continue to mix, serve or stuff into a turkey to finish.

6 bunches of scallions, plus extra for garnish