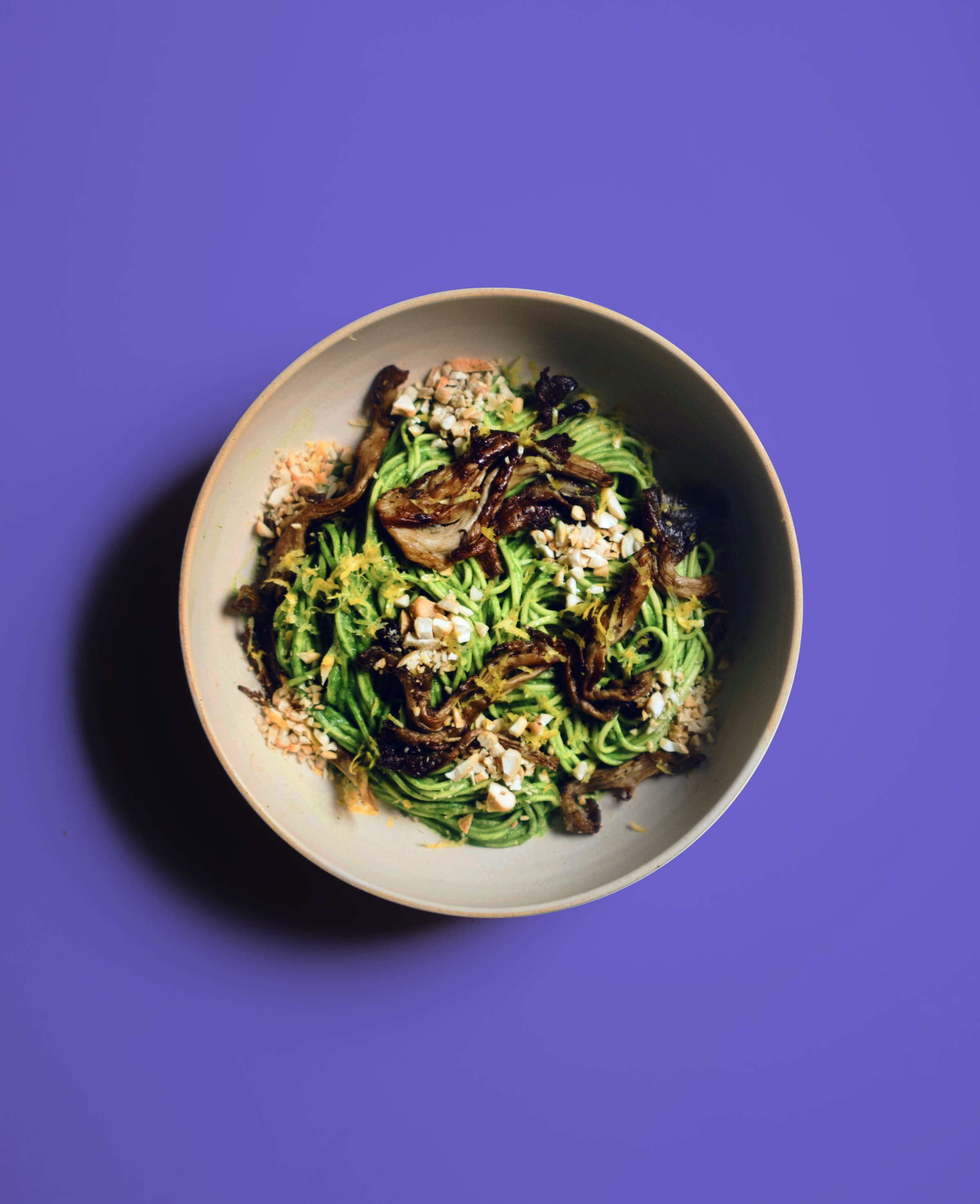 This noodle bowl is tossed with a vibrant green sauce made with blanched kale, pan-fried scallions, soaked cashews, garlic, and lemon. It's quite the versatile savory sauce for not just noodles but for meats, eggs, vegetables, salads, you name it. This particular noodle and sauce combo I added roasted oyster mushrooms to add meatiness and topped with some lemon zest and chopped cashews.

(You can also use dry pasta)

Pour flour into a large mixing bowl and create a medium sized well in the middle. Add egg yolks and eggs into the well and scramble using a fork. As you're mixing the egg, slowly incorporate flour from the outer edges of the well until the egg becomes a thick paste. Use hands to incorporate the rest of the flour and begin the kneading the dough until it becomes becomes smooth and the surface is uniform, around 5-10 minutes. When you press into the dough and it bounces back a little, you know it's done. When ready, wrap dough baby in plastic wrap and let it proof for about 1 hour.

Set a small pot of water to boil. Prep kale by removing the hard stems and saving the leaves. When your water is boiling, put all your kale in and let it take a little boiling water bath for about 3 minutes until cooked through, then remove and strain, set aside.

On a pan with a generous amount of oil on medium-high heat, cook scallions and smashed garlic cloves until lightly fried, gently mixing them around in the pan so they don't burn, about 2-3 minutes.

Add cooked kale, pan-fried scallions and garlic, soaked cashews, and the rest of the sauce ingredients and blend in a blender until it's vibrantly green and smooth in texture. Pour into a container and seal until ready to use.

Preheat an oven to 400°F. In a mixing bowl, mix mushrooms with a generous amount of olive oil. Massage in some salt, and pepper to taste as well. Evenly lay out all your mushrooms on a sheetpan lined with parchment paper, and cook for 10-20 minutes until your mushrooms have cooked through and you have some nice crispy edges. When done, set aside mushroom until noodle bowl assembly.

Lightly dust a work surface with flour. When your dough is ready, take out of plastic wrap and cut in half. Roll out each dough half until you have two rectangles the size of your hand. Fold each rectangle into thirds and once again continue to roll the dough out lengthwise with your rolling pin to flatten until you have two long rectangles. As you're rolling the dough out, lightly dust your dough if it starts to stick to the work surface. With a little elbow grease, roll out each half to desired thickness. I usually stop when the dough is just thin enough where you can see a light shadow of my hand. Generously dust your long rectangles and then fold each one evenly into thirds or quarters length-wise. Take a large knife and evenly cut across your folded doughs to desired noodle width. Unravel your noodles and sprinkle with generous amount of flour after cutting to keep from sticking to each other.

In a pot, boil some water with some salt. Place noodles into boiling water and cook for one to two minute until al dente. Remove from water and strain. In a mixing bowl, coat your freshly cooked noodles with your green sauce, and mix until incorporated. Place sauced noodles into a bowl and top with roasted mushrooms, chopped cashews, and some freshly grated lemon zest. Add salt and pepper to taste, enjoy!

You can store freshly cut noodles straight into the freezer, and it'll keep for up to two months. Just throw it straight from the freezer to boiling water and it'll taste like you made it that day. If you can't finish all the sauce, just place in ice cube trays and freezer, microwave a cube whenever you need a little sauce kick.

(You can also use dry pasta)