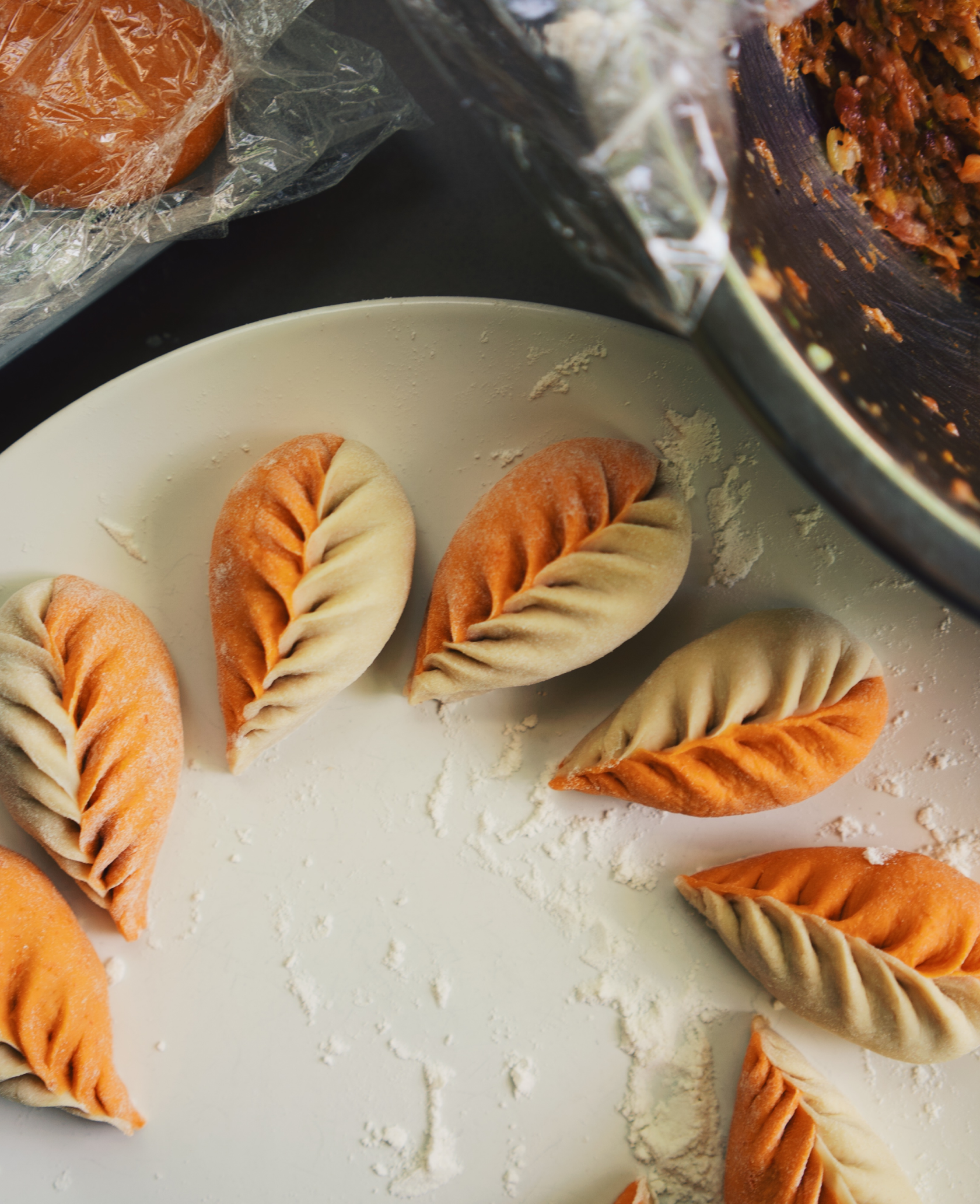 A colorful riff on the flavors of Taiwanese pork pepper buns, this steamed bun is filled with pork that's seasoned with black pepper and red bell pepper paste and paired with napa cabbage and shiitake mushrooms. It's colorful wrapper is made with red bell peppers that are cooked down and used as a paste to dye the flour. A nostalgic dish of grandma's kitchen and Taipei night markets all in a colorful, flavorful package.

Prep your bell peppers by chopping in half and separating flesh from inner core, discard white parts and stem. Roughly chop the bell peppers and place into a pot with olive oil on medium heat. Cook until soft, about 10-15 minutes, stirring every so often and making sure not to burn.

When bell peppers are soft, move to a blender and blend until smooth. Return the mixture to pot on medium heat. Stir mixture often as it starts to thicken. You'll know it's done when it has become a dark red, thick paste. Set aside when done until ready to use.

To make the orange dough, activate yeast with 3/4 cups warm water (between 95°-115°F) for 5 minutes. While waiting, place flour, salt, sugar, baking soda, baking powder, and red pepper paste into a mixing bowl. Pour activated yeast/water into the flour and mix until it forms clumps. Then, knead with your hands for 10 minutes until the dough is smooth like a baby's butt. Cover bowl with plastic wrap and set aside. Repeat process in a separate mixing bowl with white dough ingredients. Proof both doughs for 1 hour.

Place cabbage into a large mixing bowl, throw in 1/2 teaspoon of salt and mix with fingers, incorporating salt throughout. Let cabbage sweat out water for about 15 minutes. Meanwhile place remaining filling ingredients in a mixing bowl.

After the cabbage has sweated out all its water, place onto a thin dish towel or a few layers of thick paper towels and wrap around the cabbage to enclose. Using your hands and brute strength, squeeze out as much excess water from the cabbage as you can through the towel. Transfer cabbage to the rest of the filling mixture and use fingers to mix all that juicy meat mixture goodness together. Use a circular motion with your fingers until the filling looks homogenous and sticky, about 3 minutes.

Lightly dust a work surface with flour. When your dough is ready, take out both colors and cut each in half. Keep a half of each color to use, while storing the other half in plastic wrap to keep from drying out. Roll orange and white half into two cylinders, about the size and shape of a very large sausage. Cut each cylinder into 5 equal pieces, they should look like marshmellows. Then, turn each piece cut side up and with the palm of your hand, press down onto it to flatten to make a roughly flattened circle. Dust each side with flour and then with a rolling pin, flatten to create a circular wrapper to desired thickness, about an 1/8 of an inch - not too thin but not too thick. Repeat with the rest of your marshmellow dough pieces until you have a bunch of wrappers. Make sure to flour each wrapper as you roll them out and then cover with plastic wrap so they don't dry out.

For a braid fold with two colors, take one orange bun wrapper and one white bun wrapper and use a bench or knife to cut in half. Reattach one orange and one white half by overlapping the edges in the center and pressing down to attach. Sometimes a tiny bit of water in the center edge helps attach the two halves together. (If doing solid color you can skip this step).

To fill, place a ping pong sized amount of pork filling into the wrapper (it's okay if it seems like a lot). Create a taco shape with the wrapper and push one of the ends a 1/2 inch into the meat to make a “w”. Squeeze the to folds together and push into the meat again. This time, take the right half of the “w” and pinch, push into the filling, then take the left half of the “w” and pinch, squeeze into the filling again. Repeat this process (the excess meat will squeeze itself out) until you've enclosed the meat. Pinch the tail end of the braid and shape the dumpling to resemble a tear drop.

In a bamboo steamer place parchment paper underneath each bun (or get steamer liners with holes in them) and place bao on top. Place your steamer with bun on top of a shallow pot with boiling water. Steam for 15 minutes until cooked through, serve.